Journalist and activst, from many years she’s working on the storytelling and defense “of domestic violence victims and unheard mothers who are discriminated and punished in the italian courts of justice”.  She was nominated as testimonial by the United Nations, rapresenting Italy for the 2021 International Human Rights Day

Dijana Pavlovic, don Palmiro Prisutto, Pietro Turano and Federica Gasbarro are only some of the activtists who were awarded with the CIDU Award for Human Rights this morning (by the Interministerial Committee for Human Rights), in the Ara Pacis Museum of Rome, for their commitment in defense of ethnic minorities, health, the LGBTQI + community, against all discrimination.

2021 CIDU Award for Human Rights and Freedom of the Press

Luisa Betti Dakli, investigative journalist and DonnexDiritti Network’s editor was nominated as testimonial also by the United Nations, rapresenting Italy for the 2021 International Human Rights Day. Among them also Luisa Betti Dakli, a Roman journalist engaged for years in the storytelling of violence and in the defense of women: “I am proud to have received this award from the hands of President Laura Boldrini and I dedicate it to all survivors of domestic violence and to all unheeded mothers who are not protected by the Italian courts ”, says the journalist. “And in particular to Laura Massaro who has been in the grip of institutional violence for almost 10 years. I will be hapy only when women no longer will have to fight for their right to a life free from violence. When I started and chose to focus on human rights, I did not expect this type of work to be recognized as it is recognized today”.

“I received the award in the name of all the women I have heard and to whom I have given a voice in many years of my work for the rights of women and children in the world”, continues Luisa Betti Dakli

“I dedicate it to women victims of domestic violence who are not believed and not recognized as such in the courts and to all the activists who work on women’s rights, with a focus on Afghanistan which is currently under siege by a regime that does not recognize the women not even as human beings “.

Rights of the Rom and Sinti community

During the ceremony – which was attended by many representatives of the institutions, including the Minister for Equal Opportunities and Family Elena Bonetti and the Honorable Member Laura Boldrini – the commitment and the results achieved were celebrated. But all the activists and associations speakers stressed that in terms of human rights there are still many steps to be taken: “In Italy 78 percent of people still have strong prejudices against the Rom community”, said Pavlovic, who is part of that community and wanted to dedicate her own prize “to Rom activists who fight against prejudices every day. And I dedicate it to Olga “, continued the activist, a little girl who died on November 17th in Greece crushed by a sliding door”.

“Olga was in agony for more than an hour without anyone intervening. I dedicate it to the children in the camps in Libya and Greece, enslaved while they wait for freedom”

Pavlovic then launched an appeal to the Italian state “For my people: apply Article n.6 of the Constitution and recognize the Rom and Sinti as a historical linguistic minority”. Also with regard to the protection of the LGBTQI + community, Pietro Turano said, “It is not the time for prizes and celebrations, it is time to look in the mirror and take on our responsibilities”.

Sahraa Karimi and the Afghan drama

And if Don Prisutto and Gasbarro gave voice to the importance of environmental protection, directly linked to the health of human beings, the Afghan director Sahraa Karimi, host of the ceremony, launched a new appeal for her people: “Suddenly the international community and all those who said they wanted to save us, left with a shameful agreement with the Taliban”.

“Your opinions will be heard”, she said to the institutions present in the room, “use your power and do not make Afghanistan return invisible. If you close your eyes the consequences will follow you because you are responsible. You came to our country saying you would save us, we trusted it. Now listen to us. Don’t recognize the Taliban: talk to us, instead, the young people ”. And again: “Do you think that civilization has existed and exists only in Europe? We too have a rich and beautiful history, listen to us ”.

The activists chosen for 2020 were also awarded

Not only that: today the activists and associations awarded in 2020 also received the award, when the recognition, conceived by the then Deputy Minister of Foreign Affairs and International Cooperation Claudia Emanuela del Re, was only virtual due to the pandemic. Among them, the Observatory for security against discriminatory acts of the Police and the Carabinieri (Oscad); the Green Cross Italia association, the founder of the Turin Arsenal of Peace Ernesto Olivero; the founder of Slaves no more Eugenia Bonetti; Nicolò Govoni for his commitment on the issue of immigration; Valentina Tafuni for her awareness-raising activity on disability and Nello Scavo, in the Freedom of the press and information section.

This article was written by Rory Cappelli and published on 10 December 2021 on Repubblica.it 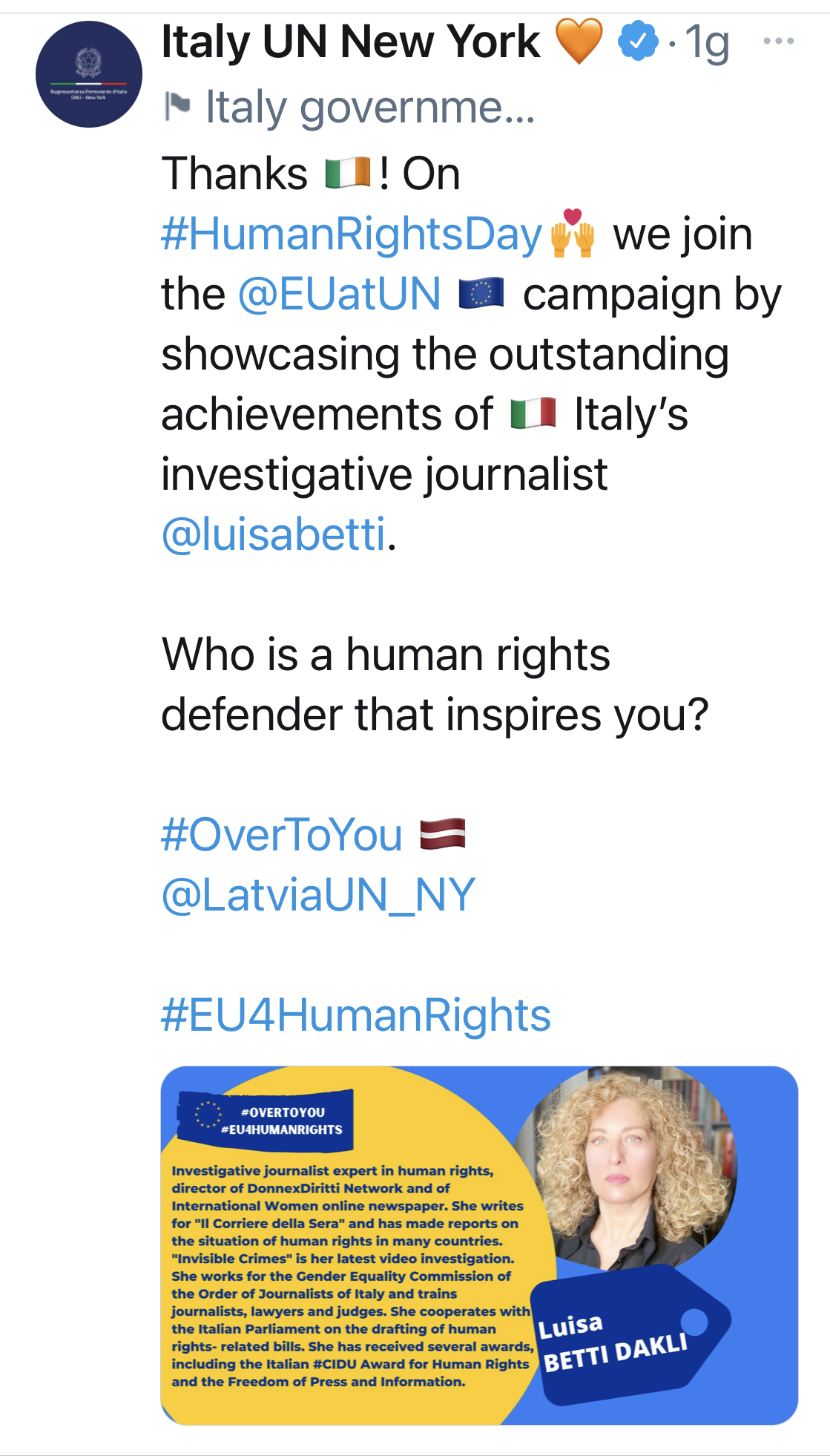