After the torchlight procession for Sarah Everard, in the UK the government pushes for a bill that gives full powers to the internal authorities, but already for a year the suffocation of peaceful demonstrations worldwide is multiplying

A 61-year-old man, Antonio Granata, slit his wife’s and mother-in-law’s throats, Carolina Bruno and Lorenza Addolorata Carano, in Massafra, in the province of Taranto. A few days earlier, a 39-year-old woman, Ornella Pinto, was killed in Naples. Her partner, Pinotto Iacomino, stabbed her 15 times while she was sleeping with her four-year-old son.

Women’s demonstrations in Mexico and Australia

The umpteenth feminicide has aroused serious indignation on social networks. Another woman was hit in the house where she should have felt protected. A tension that if it didn’t break out in the streets yet it’s on the verge of exploding. As it happened in Mexico, where for weeks women have been besieging the government against the candidacy of Félix Salgado Macedonio: a man accused of rape, as governor of the state of Guerrero in the south-west of the country. 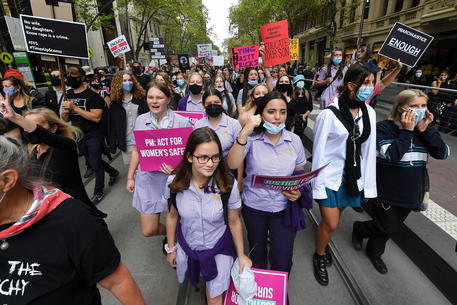 Or even in Australia where women took to the streets in 40 cities protesting against violence and gender discrimination after the rape reports that overwhelmed the conservative government. Here Brittany Higgins, former government employee, reported being raped in 2019. 15 days ago, Attorney General Christian Porter confirmed of being the subject of rape charge, but denying he had committed the act on a woman who committed suicide last year. The real reason that triggered the women protests in Australia, was the echo of the protests against the feminicide of Sarah Everard. The 33 years old girl was kidnapped and killed in London by a Scotland Yard agent, Wayne Couzens. Sarah was just coming back home at 9.30 pm after a dinner with her friends.

Her remains were found in a wood 78km away from where she disappeared. her body was so unrecognisable that they traced it to her through dental analysis

What happened brought women to protest and organize a wake at Clapham Common, the park close to the place where Sarah Everard disappeared. The police viciously charged the women, revealing to the world their intentions regarding the social control that the Covid pandemic allows to put in practice. Clear statements were made the next day when the Prime Minister, Boris Johnson, backed Cressida Dick, head of Scotland Yard, by simply declaring that women “are afraid to walk around at night”. An internal inquiry has been launched behind closed doors concerning Saturday’s events, but the answer to all this is indeed the proposal for a bill that would give the police full powers to repress any right to peaceful protests.

A bill that would give the interior minister, priti patel, the power to create emercency decrees, imposing conditions on peaceful protests at any time and without parliamentary consultation 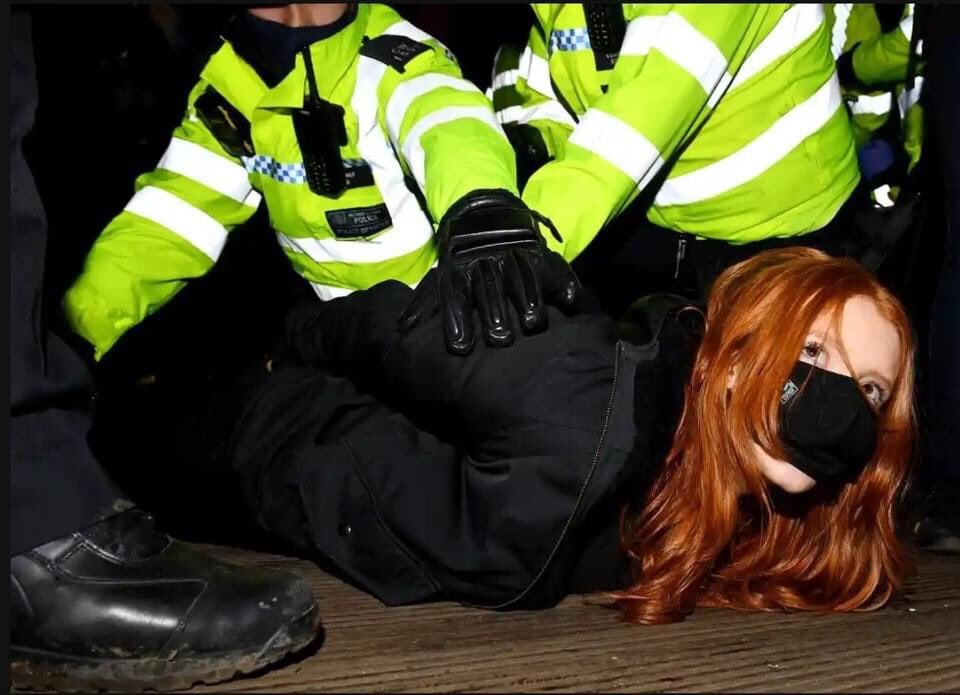 The HMICFRS report, ordered by Patel after the 2020 Extinction Rebellion (XR) and (BLM) protests, had already outlined the “need to develop” covert intelligence gathering methods and make greater use of facial recognition technology, despite the Court of Appeal ruling had condemned its use. The government claims that this bill, tabled in the House of Commons, will give the police powers but only to protect themselves and the citizens. A bill against which more than 150 human rights organizations and trade unions have protested, accusing the government of taking advantage of the pandemic to erode the right to protest. But would this be the first attempt to establish a draconian regime of social control under the guise of Covid restrictions? Absolutely not, in fact we can say that

This is the direction in which the governments of many countries, including “democratic” ones, are going. while ignoring the bans on shopping, nightlife and stadium gatherings, they do not hesitate to use force when it comes to protests and the claim for rights

Repression across all Europe

This may seem normal in dictatorships such as Hungary, Slovenia or Poland, where Marta Lempart, leader of the movement against the abortion and civil rights’ ban, is currently risking eight years in prison. While it seems less obvious in countries claiming to be “democratic”, such as Sweden. In its latest report, the Civicus Monitor shows that the governments of the EU, Norway and the UK, using as an excuse the fight against the pandemic, have already restricted civic freedoms in different ways.

In the report People Power Under Attack 2020, between the end of 2019 and the whole 2020, the intervention on protesters is documented as the most common violation made in Europe and worldwide, with detentions, censorship, restrictive laws, excessive use of force, intimidation and harassments.

Infection due to police strategies 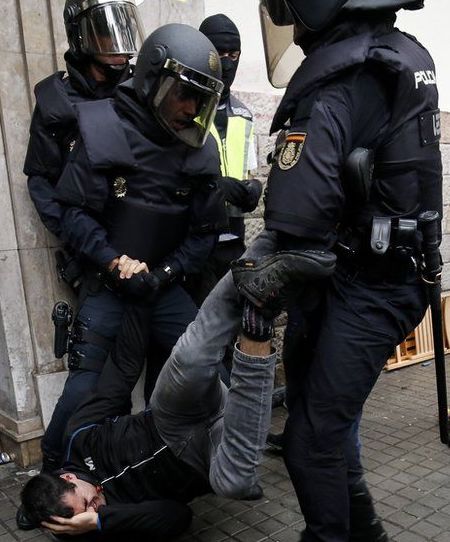 Even though these actions are aimed at avoiding the risk of infection, there is no shortage of contradictions. Although governments imposed these measures to deal with the pandemic, when the restrictions on Covid were loosened, people were allowed to gather in places of worship, shopping centres or restaurants. But the number of people allowed to gather to protest, even wearing masks, was strictly limited. As it happened in Sweden, where the government banned public gatherings of more than eight people even though it allowed people to meet in restaurants, at sporting events and other similar places.

Authorities used force and kettling (police cordons) to disperse protests, with a physical contact that increased the risk of infection: as in poland and the united kingdom, where police removed the protesters’ masks to identify them

In Europe, this year, people took to the streets despite the pandemic to protest against the climate crisis, racial discrimination, women’s rights, LGBTQ and workers’ rights. Detentions of protesters were documented in at least sixteen EU countries, and the use of excessive force was recorded in ten states including Italy, Germany, the Netherlands, France, Belgium and Greece.

Use of excessive force 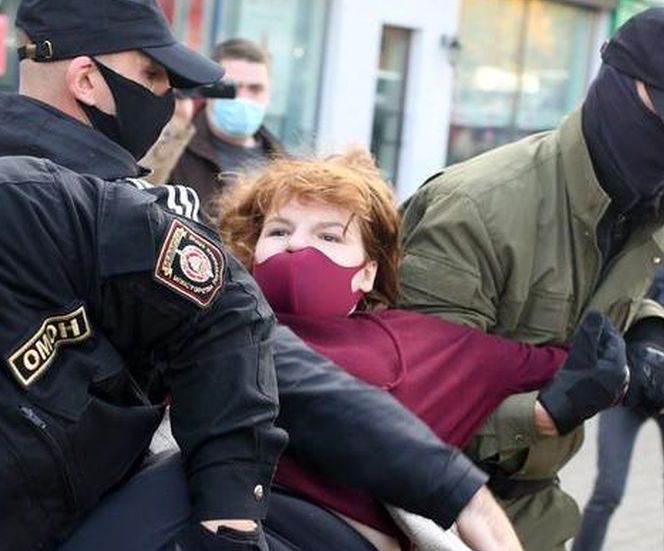 In 2020, after the killing of the American George Floyd by a police officer in Minneapolis, Black Lives Matter protests took place across Europe and in Berlin dozens of protesters were arrested. The French police used tear gas and brutal force against women during a demonstration the 8th of March for the International Women’s Day. In Finland, police diffused pepper spray at close range and arrested more than 50 people during a protest carried out by the environmental group Extinction Rebellion Finland. 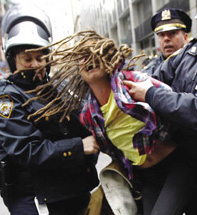 In Norway 40 people were arrested while demonstrating against the government’s failures on climate regulations. In Sweden, Greenpeace demonstrators were arrested for organising a protest against an oil refinery. Similar cases were documented in Austria, Belgium, Germany, Ireland and the Netherlands.