From the comfort women in Cina to Burma: the War rape in Asia

In 85% of the rape cases, officers violate girls and then pass the victims to the troops for collective rapes until to kill

Point 9.2 of the Charter of the Asian Human Rights adopted in 1998 in the Kwangju conference in South Korea from more than 200 NGOs and human rights activists, says: “The increasing militarization of many Asian companies has led to the increasing of acts of violence against women in situations of armed conflicts, including mass rape, forced labour, racism, kidnapping and expulsion from their homes. Since to women victims of armed conflicts is often denied the chance to get justice, rehabilitation, compensation or compensation for the suffered war crimes, it is important to underline that systematic rape is a war crime and a crime against humanity. ”

Words that imply how in the history of Asian conflicts ongoing mass rapes are sadly present, permanent and institutionalized. Starting from the “comfort women” and the tragedy of Nanjing, meaning the Japanese Invasion of China in ’37,

THERE ARE ABOUT 200,000  CHINESE, KOREAN, PHILIPPINE, INDONESIAN, THAI, VIETNAMESE, MALAYSIAN AND DUTCH WOMEN, BRUTALIZED, RAPED AND REDUCED TO SEXUAL SLAVES FROM THE JAPANESE TROOPS

“Twelve soldiers raped me one after the other – describes a philipine – and after that I was given an hour of break. Then other twelve soldiers followed. They were all lined up outside the room waiting for their turn. I was bleeding and I felt so much pain that I could barely stand up. The next morning I was too weak to get up and I could not eat. I felt a lot of pain and my vagina was swollen. I cried and cried, calling my mother. I could not revolt to the soldiers because they would have killed me. What else could I do? Every day, from 2 pm to 10 pm, the soldiers lined up outside my room and outside the rooms of the six other women who were there. I did not even have time to wash me after each assault. At night I could only close my eyes and cry. My torn dress would have crumbled because of the crust formed by the dry sperm of the soldiers. I washed myself with warm water and pieces of my clothes to be clean. I pushed the dress on my vagina as to relieve the pain and the  swelling”.

Women forced to submit themselves to continuing violence by soldiers and therefore called “comfort women”, a nightmare that began with 223 rapes by the Japanese navy stationed in Shanghai from the ’32, where the Lieutenant Okamura sent a request to obtain a military brothel, planning a practice that lasted for more than 10 years. “Life for us did not make any sense – tells a survivor – and if someone tried to rebel, it was her end. One evening the youngest between us, who had perhaps 13 years old, tried to escape from the attentions of a particularly violent Japanese officer. We were all gathered together in the courtyard, the girl who had dared to oppose to the rape was dragged by the hair down to the middle. A soldier cut off  her head with a sword. Her body was cut into small pieces. ”

GIRLS COULD BE BEHEADED, BURIED ALIVE, BURNED, CLUBBED, FED TO THE DOGS, WITH PATHOLOGICAL SADISM 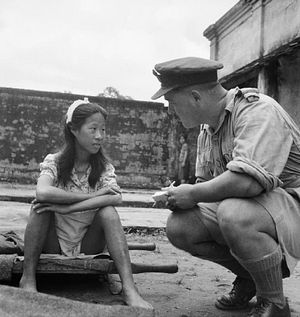 At the end of the War, among the 50 courts located in Asia, the only one to pass a judgment concerning “forced prostitution” was the one in Batavia (Jakarta) in Indonesia because even the Tokyo Tribunal did not recognized to the perpetrators of this massacre any guilt. The most terrible thing, however, was that this system survived after the end of World War II: American occupation troops kept the institutions making a wide use of them. Then, in the ’60s, the US military presence in Southeast Asia, Thailand, Cambodia, Laos, Vietnam and Burma, caused a significant step forward in prostitution with an increase of rapes, child abuses, ill-treatments, forced sexual performances and violence of all kinds.

IN THAILAND IN THE ’50 THERE WERE 20,000 PROSTITUTE THAT AFTER THE CONSTRUCTION OF AMERICAN BASES BECAME 400,000 ONLY IN BANGKOK WITH THE 30% OF MINORS AND GIRLS RAPED AND INCORPORATED INTO THE  SEX MARKET

At the end of the Vietnam War, in Saigon, there were about 500,000 prostitutes. In Cambodia, after the peace agreements, 100,000 troops, the United Nations and other international institutions arrived, and the number of prostitutes rose from 6,000 to 20,000 within two years. The Americans created the largest US base in the city of Olongapo, north of Manila, which became a huge brothel with 60,000 women reduced to sex slaves, including girls. Now in Asia the emergency is in Burma where for 40 years the war in the Kachin and the Shan, is bringing dead, torture and mass rapes used as a weapon to bend the population. Zau Raw, Kachin Refugee Committee, speaks of “Burmese soldiers in civilian clothes who rob and assault continuously in Kachin since June 9, 2011.

Today in Burma women suffer, in the silence of the international media, the devastating consequences of the conflict, especially in the North, between the Burmese government army and rebel militias. Systematic rapes were reported by humanitarian organizations: in 2002 the Shan Women’s Action Network released a report, “License to rape”, which documents, between ’96 and 2001, more than 600 kidnappings and sexual assaults committed by Burmese troops, while in 2007 the report “State of Terror”, the Karen Women’s Organization, gave more than 4,000 abuses, kidnappings, murders and tortures in about 200 villages.

In June 2009 Nay Pay, who was 18 and 8 months pregnant, and Naw Wah Lah, 17 years old with 6 month old baby, both came from the village of Kwee Law Plo: they were detained, raped and killed by Burmese soldiers. Women are often raped and imprisoned in the military bases for months: the 85% of the officers rape the girls before passing them to the troops for collective rapes or to be killed, strangled, stabbed or burned, with the body often exposed as a warning for the community. 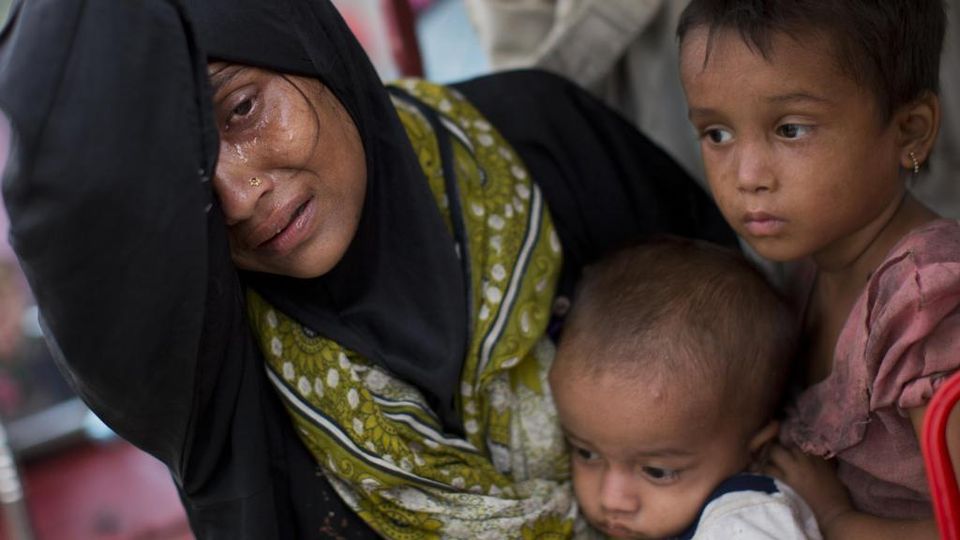 Some survivors were found unconscious: Naang Hla, 7 months pregnant, after being raped was left alone in the jungle with diarrhea and bleeding, she could neither walk nor stand, and after 4 days she gave birth in a confusion;

A 5 YEAR OLD GIRL  HAS BEEN FOUND TIED AND SEMICONSCIOUS  IN A PUDDLE OF BLOOD , WAS BROUGHT TO THE HOSPITAL, WAS SEWN BACK FOR THE SERIOUS INJURIES REPORTED TO HER VAGINA TORN BY THE RAPE

The survivors to this destruction have no support in Burma and can not obtain justice, and the most serious issue is that they are completely isolated from the rest of the world as international agencies for human rights have no access to Burma. Rape has echoes far away, it is a way of seeing women that it’s difficult to eradicate, both in times of peace and in times of war: if women are considered less than nothing in a society, they will be an easy target in times of tension. 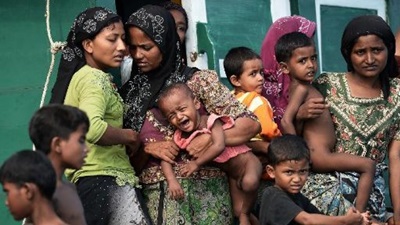 In Nepal sexual violence was used by the army and the police as a weapon to punish women who joined the Maoist army, and the rape often took place in public. In the conflict between Pakistan and Bangladesh in ’71 about 200,000 women were raped and if none of these has ever received justice, it’s not a surprise since that in Bangladesh the law on sexual violence includes the need of witnesses during a rape, in Pakistan the Hodood Ordinance requires rape to be testified from 4 Muslim males, and if the victim can not prove the violence, is accused of adultery and goes straight to prison where she will be raped and then stoned.

“Rape has always been part of conflicts, it is mentioned in the Trojan War and in the Bible, and some might even think it is a collateral damage. But actually it is not: rape is not inevitable”, says Margot Wallstrom, UN special representative for sexual violence in conflicts, adding that “International law exists but the problem is that it must change its attitude” as the rapists must not feel as acting with total impunity.

A subject, that of justice, also mentioned in the recent report “Progress of the World Women: In Pursuit of Justice”, written by UN Women, the UN agency for women led by Michelle Bachelet, former President of Chile and now Executive Director of UN women, where we read that too often “crimes against women are not disclosed” and that “millions of women in the world continue to experience injustices, violences and inequality in their homes, in their workplaces and in their social life “, factors that make difficult an actual overcoming of the disparity between men and women.

The soft-porn narrative of violence against underage girls

Safe from fear: the correct information of gender-based violence as a form of prevention

In Europe feminisms fight the right, but the women leaders are more at the top of the right than of the left

Cedaw: Italian women send the Cahiers de doléances against their government to the United Nations