In 1989 Mikhail Gorbachev and George HW Bush reached an agreement and in exchange for a united Germany, Russia was assured that the Warsaw Pact countries and the former Soviet republics would never enter NATO: an agreement never written but did not last long, given that most of those countries are now part of the Atlantic Alliance

Milena Gabanelli
She is an investigative journalist, a television author and she directed and conducted “Report” in Rai3. She also lead the newspaper heading DATAROOM in the Corriere della Sera.

The fate of Ukraine is already written in its name: in Slavic the expression “u-craina” means “on the border” and, in geopolitical language, it is the buffer space between two powerful countries that must not belong to anyone to guarantee the strategic balances. When the USSR collapsed in 1991, Ukraine was the first of the Soviet republics to leave Moscow. 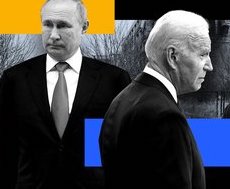 And it was prophetic Zbigniew Brzezinski, the security adviser of the White House at the time of Carter, who warned that the birth of Ukraine would prove to be “one of the three great turning points of the twentieth century, after the dissolution of the Austro-Hungarian Empire and the Cortina of iron”. The recent tension between Russia and the West comes from those distant events. But why is this country – the largest in Europe after Russia, as large as Germany and Great Britain combined, with 44 million inhabitants (the same as Spain) – so much disputed that it brings us back to Cold War scenarios?

“THE TRUE EAST-WEST LINE PASSES THROUGH UKRAINE AND THE CASPIAN ENERGY RESERVES – AS THE NEW YORK TIMES WROTE SOME YEARS AGO – PUTIN IS INTERESTED TO OWN IT, THE US TO CONTROL IT” 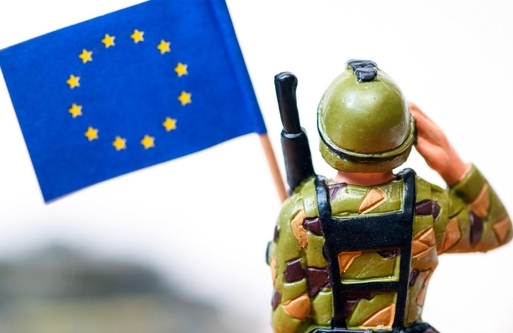 Let’s go back to 1989. The Russians argue that after the fall of the Berlin Wall there was an unwritten agreement between the Soviet leader, Mikhail Gorbachev, and the then American President George HW Bush: in exchange for the reunification of Germany and the withdrawal of forces armed with Moscow, NATO would never have expanded to the countries of the Warsaw Pact (at that time Poland, Hungary, Bulgaria, Czechoslovakia and Romania were part of it), and even less to the former Soviet republics. It is an agreement that the Americans have always officially denied. And that did not last long anyway. The independence of Ukraine was sanctioned by a referendum on 1 December 1991: exactly five months after the dissolution of the Warsaw Pact.

In 1993, with the birth of the European Union and the first requests for membership from Eastern countries, the United States invented the “Partnership for Peace”, a program that bypasses Russian vetoes and brings NATO closer to more than just the countries of the former Warsaw Pact, but also pieces of the old USSR such as Estonia, Latvia and Lithuania. 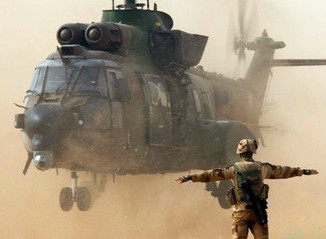 But there’s more: President Bill Clinton asks all Europeans to make “a choice of side” and that all negotiations for EU membership, from that moment on, are also preceded by substantial adherence to NATO principles. The rule is not codified, but becomes a practice, also because it is the countries themselves that ask to be part of the Alliance. It went like this for Poland, Hungary, Romania, Bulgaria, the Czech Republic, the three Baltic republics, and it is going the same way in the Balkans: from Albania to Montenegro to Macedonia.

Boris Yeltsin’s post-Soviet and weakened Russia suffered this western enlargement in the 1990s. They negotiate on everything. The two lines of the Nord Stream gas pipeline are being designed, which will have to transport Russian gas directly to Europe, “bypassing” the former allies of Poland, the Baltic countries and Ukraine, but also the most faithful Belarusians. That’s because in Moscow, at that moment, it is more urgent to collect dollars than political credit. With the entry of Vladimir Putin, everything changes. And the first, decided “niet” is precisely on Ukraine. 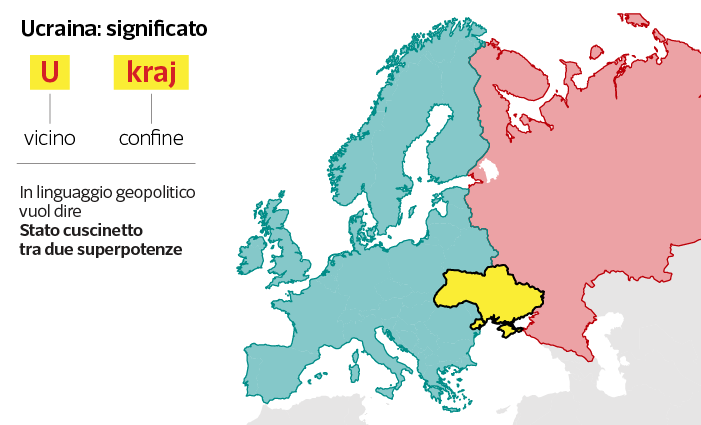 The impassable red line. Kiev was the capital of the third largest republic of the Soviet Union. The granary and arsenal of the empire: it gave Moscow a quarter of cereals, milk, a third of iron, coal and manganese, 60% of bitumen and anthracite, it housed nuclear power plants and warheads. The population of eastern Ukraine and Crimea has always remained largely Russian in terms of language, mentality and culture. Last July Putin made it clear how he thinks it: Ukrainians, Russians and Belarusians are born from the same root and must remain together. Ukraine, therefore, no: its entry into NATO, like that of Georgia, would diminish Russia’s strategic and political credibility.

In 2004, the Orange Revolution broke out in Kiev, an anti-Russian revolt supported by the West, and it was there that the Kremlin managed to elect one of its men, Viktor Janukovyč, with a vote that was declared rigged: his opponent, Viktor Juščenko, is mysteriously poisoned with a dose of dioxin. And at the end of a dispute over gas, with Moscow accusing Kiev of skimming on supplies to Europe that pass through Ukrainian gas pipelines, it is always Janukovyč who gets re-elected and moves the country to the positions of Moscow.

On April 4, 2008, during the NATO summit, convened in Bucharest, the US pressured for the entry of Ukraine and Georgia into the Alliance, but nothing was done due to the opposition of Italy, France and Germany. Romano Prodi, who was present at that summit, recalls “the summit was convened only for that, but we said no,” for now “, because it would have created tensions”.

IN FACT, GEORGIA, FOR TRYING TO GET OUT FROM THE INFLUENCE OF MOSCOW, IN AUGUST 2008 TASTES THE FIRST EUROPEAN WAR OF THE 21st CENTURY 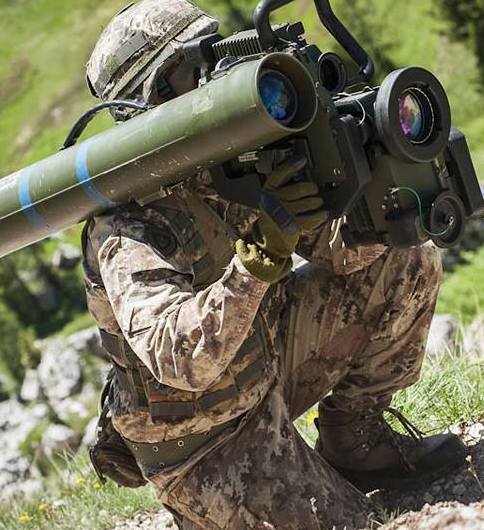 Moldova finds its exports to Russia blocked as soon as it signs an agreement to bring it closer to Europe. In 2014 in Ukraine it will be a new bloody uprising of the capital to expel Yanukovyč definitively, unveil American plans and push Putin to a double response: the invasion of Crimea and the annexation of the peninsula through a referendum presided over by the occupation forces; the secession of the pro-Russian Donbass region, on the eastern border, which will lead to the self-proclamation of the republics of Donetsk and Lugansk and will start eight years of a long ongoing civil war, with 14,000 dead.

Who is sending weapons?

To block Ukraine’s aspirations to place itself under NATO protection, Russia has intensified the massing of troops and armored vehicles: 130,000 men on the borders of the Donbass, plus 40,000 stationed in Belarus, as well as in Moldova and Transnistria. Ukraine asks for help and the answer comes with a massive supply of weapons. A NATO law prohibits exports to third countries without the producer’s green light: before selling German weapons to the Ukrainians, for example, Estonia must have the permission of Germany (which has decided not to give it). 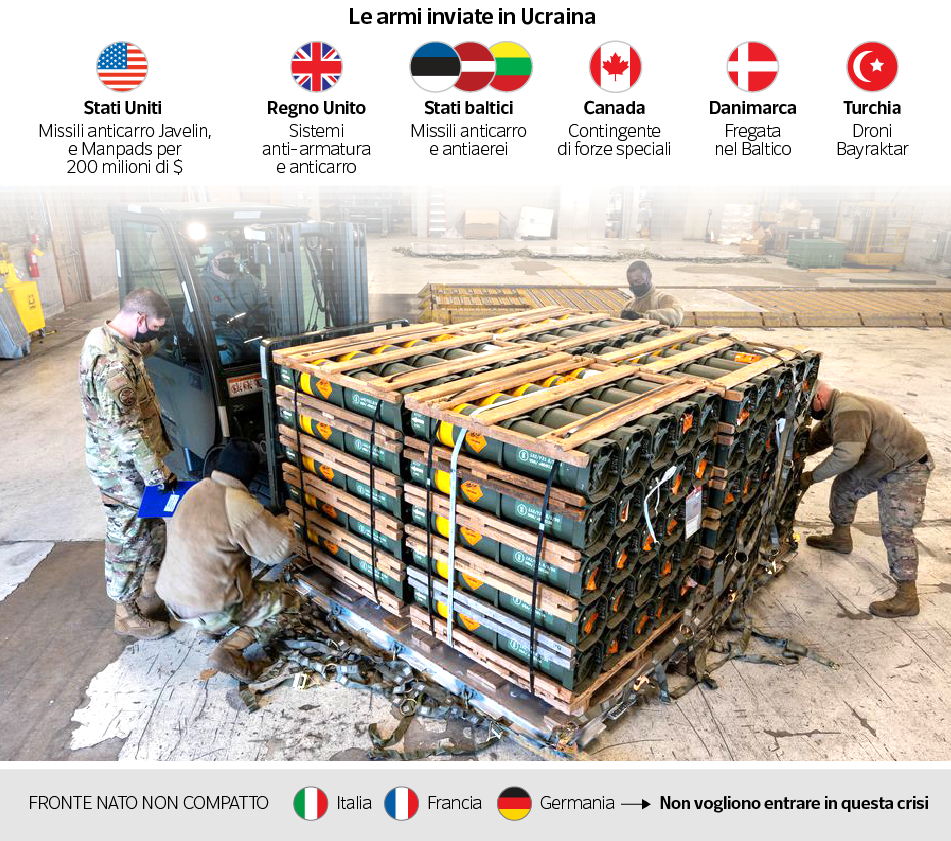 In this case, the rule no longer applies and the US has authorized NATO countries to export weapons of all kinds. From the US arrived Javelin portable anti-tank missiles with autonomous infrared guidance and powerful anti-aircraft missiles (Manpads). From Great Britain small arms, anti-armor, anti-tank and military training personnel. The Baltic states send anti-tank and anti-aircraft missiles. The Czech Republic sent small arms. Canada is a contingent of special forces. Denmark will send one frigate in the Baltic, plus 4 F-16 fighters in Lithuania.

Holland will send 2 F-35 fighters. Spain has declared itself ready to do its part. Turkey has sent Bayraktar drones, capable of fighting and acquiring information. Germany’s refusal is the first in 70 years, and has cracked the NATO front, with France and Italy not wanting to get involved in a crisis where European energy security and important trade relations with Russia are at stake: 25 billion of euros in turnover a year for Germany, 9 for Italy.

NATO: goals to be reviewed

To stop the escalation, Putin asks Washington for a written commitment: Ukraine will never enter NATO, no NATO exercises along the Russian borders, no American troops in the Baltic countries. Biden’s response: we discuss, but Ukraine decides which security system to join. And in the event of an invasion, there will be heavy sanctions and Russian banks out of the international banking circuit.

UKRAINE IS SPLIT INTO TWO: THE WEST THAT LOOKS AND TENDS TO EUROPE WHILE THE EAST REMAINS PRO-RUSSIAN 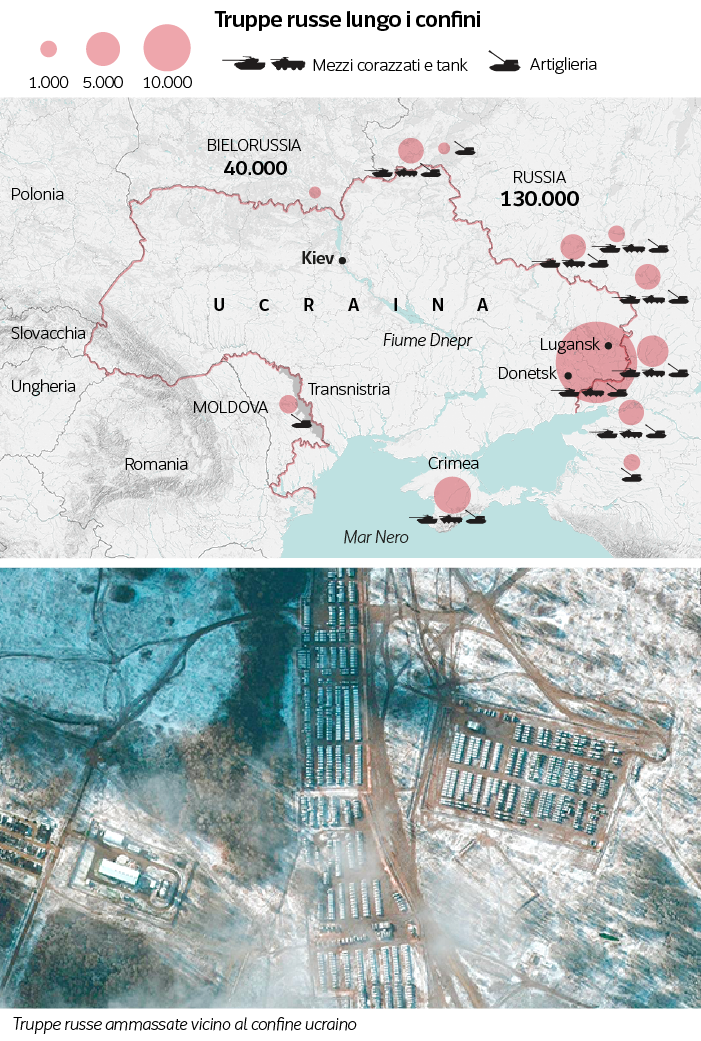 It cannot last long with a civil war involving three regions of the country, the coal mines in the hands of Moscow and the fleeing investors. A crisis that shows the American interest in reaching the Russian border, and Putin’s interest in preserving his political authority. 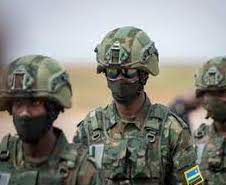 But it also reveals how NATO is an alliance to be redefined, in nature and goals, because the Cold War is over and, on the other hand, there is no longer an enemy, but a competitor. In the same vision of the American president Biden who knows the Ukrainian dossier very well – his son Hunter sat on the board of directors of the Ukrainian energy giant Burisma – China would be the real enemy. That China that Putin fears even more than the Europeans and the Americans.